It was confirmed today by the planning inspectorate that the appeal was successful and planning was granted.

The reapplication to Harrogate Council was rejected again.

As well as appealing to Secretary of State for CLG Taylor Wimpey have also resubmitted their application to Harrogate Council. Details can be found via http://uniformonline.harrogate.gov.uk/online-applications/  using reference 14/03471/OUTMAJ.

The contractors own bat survey confirms the 4 species of bats and risks that the development presents at http://documents.harrogate.gov.uk/AnitePublicDocs/07945655.pdf.

You can make your views known on this site. Please note that you will need to set up an account again due to a problem with the site.

An appeal has been made by Taylor Wimpey to the Secretary of State for Communities and Local Government. A copy of the letter confirming can be found here.

Details of the full objection can be found here on the Planning Portal. You can also add your own thoughts and objections on the same site that we would encourage you to do.

You can also read an open letter to Harrogate Council planning from a bat ecologist on the bat situation within the Pinewoods confirming the importance of the site and increasing numbers. https://www.facebook.com/PinewoodsConservationGroup/posts/668965516524916

Updated 8th April 2014: Following a planning meeting today the application as below was rejected 16 to 0. Thank you to all our supporters who voiced their objections.

The Pinewoods Conservation Group (PCG) has submitted a formal objection to the Crag Lane housing development. Taylor Wimpey recently submitted plans for 124 dwellings to be built on green space at Crag lane, adjacent to The Pinewoods and RHS Harlow Carr that the PCG have reviewed.

The group has considered the Ecological and Bio Diversity elements of the plans and has raised a number of concerns. These include the risk to protected species of bats that are resident within the Pinewoods as well as the impact on the various birds and wildlife around the proposed site.

Secretary Michelle Whitfield-Speed confirmed “After careful consideration of the plans, and with a direct impact on The Pinewoods we had no option but to submit a formal objection. There is clear evidence that the surrounding environment and wildlife will be severely impacted should this planning be approved.

The land in question is not earmarked for development in the Local Development Framework and is designated as a special landscape area. As such we call on Harrogate Council to reject this application.”

Harrogate residents who are concerned about this development and the future conservation of The Pinewoods are encouraged to join the Pinewoods Conservation Group via http://pinewoodsconservationgroup.org.uk/how-join.

A full copy of the objection can be found below.

I am writing on behalf of Pinewoods Conservation Group (PCG) regarding the proposed planning development of 124 dwellings on Crag Lane.  As we feel this development would directly and permanently impact on The Pinewoods in a negative manner we would like to formally object to the application.

The Pinewoods consists of around 96 acres of woodland situated adjacent to the site. The Pinewoods form a key link from Valley Gardens to RHS Harlow Carr, the 2 largest tourist attractions in Harrogate. The PCG is a registered charity whose main objective is to promote the maintenance and conservation of The Pinewoods. As such these plans are contrary to our objectives.

I suspect that many other objections will be received that will focus on the general issues regarding these plans including; traffic and access issues, lack of general infrastructure, concerns on drainage and flooding, impact on Police response times and the area not being included in the Local Development Framework as a preferred site. However, our main concern is the negative impact on the ecology, diversity and sustainability of The Pinewoods and surrounding areas.

Although we note that the application includes the mandatory biodiversity check lists and ecological surveys these could be seen as misleading and in cases are factually incorrect (i.e. refers to 109 dwelling).  We would also dispute the Biodiversity check list that indicates that no protected species surveys are required with regards to impact upon woodland and field hedgerows.

As such they should be reviewed further. As such our main points of concern are as below:

It can be clearly seen that approval of this site would have a severe detrimental impact on the surrounding area and nature, not only within the site but around it. As such it should be fully rejected. 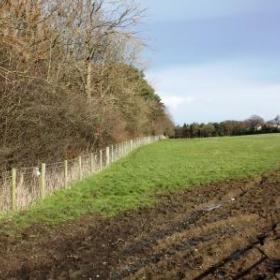