Saturday 19th July saw the formal opening of Irongate Field on Harlow Moor Road, Harrogate with a Teddy Bears picnic. The formal opening, sponsored by Harrogate Spring Water took place at 1pm by Mayor Cllr Jim Clark in a rare moment of sunshine. Despite the mixed weather about 100 people attend, many with bears to see the field and enjoy food prepared by 20th Harrogate Scouts. There was also a “bested dressed bear” competition as well as a visit from a rather large bear!

The field has been transformed by Pinewoods Conservation Group into a green community space with funds from Harrogate Council and the Big Lottery Fund.  The last 6 months has seen the installation of a new path, 5 picnic benches, additional trees and over 1000 wild flowers with developing marsh areas.  A new information board designed by award winning Ilkley based artist Jason Crockcroft was revealed on the day.

Neil Hind, PCG Chair said “This project has been hard work as this is a difficult site. However, it has been a collaborative effort with the Army Foundation College clearing in the winter followed by planting by staff at RHS Harlow Carr and ground works by local charity Horticap. Local businesses such as Sign Express and HACS have also offered their support on the more difficult aspects.

He added “The PCG will continue to develop the site and it will take a number of years for the planting to become established. More planting will be added next year with the marsh areas being further developed. However, we know this will be an instant popular addition to the Pinewoods footprint.”

Parking is available for visitors in the lay by on Harlow Moor Road – near the junction of Cornwall Road. Sat Nav users should follow HG2 0QB.

Pictures from the project and the opening can be found here. 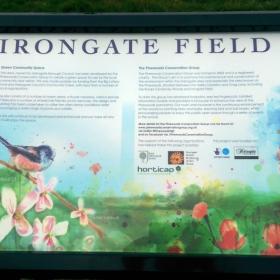 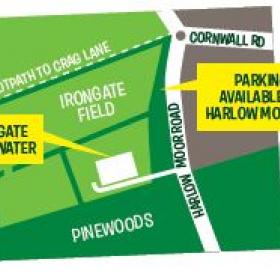