The Pinewoods Conservation Group (PCG) is planning to take part in the Harrogate Council 101 Bicyclettes project. The council is encouraging local groups, volunteers and residents to get involved in the Tour De France by decorating bicycles and displaying them across our district.

This will be the 101st Tour de France, so the aim is to celebrate this milestone by decorating 101 bikes.  The Pinewoods Conservation Group plans to place around 10 decorated bikes in the Pinewoods a few weeks before and after the race. Although some will be decorated by local scout groups and schools they are also looking for a small number of companies and organisations to support the work.

The proposal is that companies can sponsor one of the bikes and either decorate it themselves or ask PCG volunteers to decorate it for them. Locations of bikes will be not only published via our web site, twitter feed and Facebook but also via Harrogate Council on their full list of 101 Bicyclettes. A charity donation of only £45 will be requested that will help to cover materials and installation costs.

A number of current PCG supporters, including Verity Frearson and ASDA Harrogate have already agreed to sponsor bikes but a limited number are still available.

Matthew Stamford from Verity Frearson, the first Harrogate business to sponsor a bike said “As a regular supporter of The Pinewoods we were pleased to be able to sponsor the first bike. It will be an exciting time for Harrogate and we look forward to seeing our bike in The Pinewoods during the summer, along with the many others.”

More details on the sponsorship opportunity can be found via contactus@pinewoodsconservationgroup.org.uk.

Details of the main project can be found on the Harrogate Council, web site at http://www.harrogate.gov.uk/pos/Pages/101Bicyclettes.aspx. 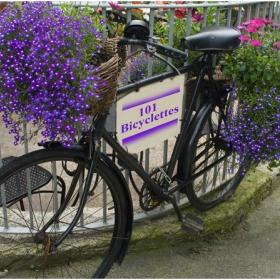